Communication today is easier than it has ever been. We can text people, call them, and even see them, and all of that with just couple button presses on your phone. Now, thanks to mobile messenger apps, all you need is internet connection and somewhat modern smartphone.

Today messenger apps pretty much replaced SMS, and that’s no wonder. It’s quicker, it’s free, and being able to see if the person is online, and if they are typing to you right now or not is way more comfortable than sending SMS, and not knowing if the person even received it.

Worldwide, there are roughly 2.52 billion people using messenger apps. Leaders, Facebook Messenger and WhatsApp, have 2.9 billion total users. As of 2020, messaging apps became 20% bigger than social networks. Every minute, there are roughly 41 million texts sent. Since Facebook Messenger and WhatsApp are both owned by Facebook Inc., there are only 10 countries worldwide, where the market leader is not from Facebook dynasty. Here is the list of the top five most used messaging apps (as of July 2019) (source): 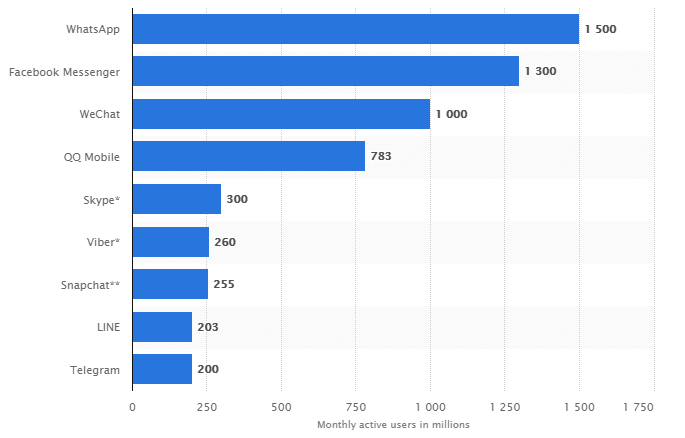 Now, let’s take a closer look at some of them.

At the moment, WhatsApp is amongst the oldest messaging apps. Created back in 2009, it was later acquired by Facebook for $19 billion.

In 2020, WhatsApp has reached more than 2 billion monthly active users, and it’s not going to stop anytime soon. With 30% YOY (year over year) growth, it has been gaining around 500 million new users each year. 1.6 billion users access the app at least once a month.

WhatsApp is also very good in terms of availability: you can use it on different operating systems (Android, iOS, KaiOS). You can also run it on your dekstop computer with WhatsApp Web. It is available in more than 180 countries, and in 60 different languages.

Here’s the list of the top 10 countries where WhatsApp is used the most (source):

Facebook Messenger was developed by Facebook Inc. in 2008. Back then it was known as “Facebook Chat”. Later, in 2010, it was revamped, and in 2011 both iOS and Android apps were available for download at the App Store and Play market.
Currently, Messenger is available for Android, iOS, and Microsoft Windows 10.

As of 2019, 1.3 billion people use Facebook Messenger. That’s 17% of the world’s population. More than 40 million businesses are on Messenger as well as 300.000 bots and their developers. Around 8 billion messages are sent out with Facebook Messenger each day (source).

Currently, Messenger is the market leader in quite a few countries, including (source):

WeChat is a Chinese chat-meets-payment type app. It was developed by Allen Zhang, and launched by Tencent in 2011. Its original name was «Weixin». Year later Weixin had reached 100 million users, and was re-branded as «WeChat».

One of the interesting features that WeChat offers is «official account». An organization can use this function to promote and offer their services.

In the first quarter of 2018, WeChat had reached 1 billion monthly active users. In fourth quarter of 2019, it had reached 1.1 billion active users (source). The reason why it’s growth had slowed down is pretty simple: almost everyone in China already uses WeChat, and people outside of China rarely use it, if they ever do.  As of 2019, 79% of China’s internet users had reported using WeChat (source).

Snapchat is a multimedia messenger app used all over the world. It’s initial release was in September  2011. It was created by former Stanford University students, Bobby Murphy, Reggie Brown and Evan Spiegel, and developed by Snapchat Inc. (later — Snap Inc.). Snapchat is revolved heavily around augmented reality and virtual stickers.

For marketing purposes, Snapchat offers a wide variety of features, including:

As for January 2020, Snapchat has 360 million monthly active users. 218 million of which uses the app daily, showing 17% year-over-year growth. Snapchat’s target audience are people of the age of 13 to 24, making up 90% of Snapchat users.

United States is where Snapchat is most popular, with 101 million users in January 2020. The other leading regions are:

What if your child is being harassed by someone online right now? Or talking to a predator, who usually nest on social media, since children and teenagers tend to post their personal information there, such as the school they go to, their first and last name, photos, and places they like to visit.

Or, what if your partner is cheating on you? Social media and messenger apps made such affairs way less risky, and way more easy. It can start from an innocent chat, just out of boredom, later becoming “sexting”, and maybe even real life meet ups.

To avoid all of the above, use spying solutions. Here are top 3 leading monitoring solutions to track all popular messengers:

With the number of users that messenger apps are gaining daily and yearly, the possibilities for e-commerce and advertising grow too. No one knows how big will these apps be five or ten years later, but it is certain that right now, there is nothing which might stop them. They’re just too comfortable, user-friendly and accessible way of communication.